Liberal Democrats have responded to Jeremy Corbyn’s re-election as Labour leader by sending an audacious plea to liberals across Corbyn’s back yard in Islington to unite against his political experiment.

Speaking after the announcement that Corbyn remains in post as Labour Leader, Keith Angus, Lib Dem Parliamentary Candidate for Islington North, said “Politics in this country is in a delicate and febrile state. We have a Tory government with no plan on our exit from Europe, while pushing on with their right-wing ideology on grammar schools.”

“In the jaws of a threat, we need a strong, decisive opposition. The Conservatives need their feet held to the fire.”

“But in Jeremy Corbyn, we simply don’t have that. UK-wide opinion polls consistently rank him as one of the worst political leaders in history. Opinion on the streets of Islington – among the general public, not Labour party members – reflects this.”

“He’s a well-meaning person. But I do not want that man to be Prime Minister of my country.”

Liberal Democrats in Islington are making a bold and assertive challenge to people in the area.

“It’s the simplest message of all: save the centre-left of politics by rejecting Corbyn, here in Islington. As things now stand, it’s the only way.”

“I know my challenge is bold and tenacious. But I can’t bear the thought of an outcome at the next election where the liberal centre-left is decimated while the Tories tighten their grip on power for a generation.”

“By voting Lib Dem at the next election, the people of Islington are getting a local liberal who’ll provide strength and leadership in Parliament, to unite and represent all of you.”

The Lib Dems are making this call based on their strength and support in the area, particularly following a huge increase in membership in Islington following the EU referendum. Acknowledging a brief setback at the last election, the contenders for power in the area are Labour and the Lib Dems. The Lib Dems have been in contention for the parliamentary seats and ran Islington council for many years. 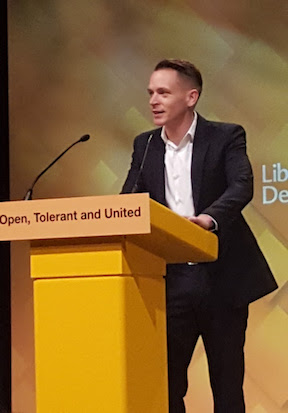