Lib Dems Campaign to Save the 277 Bus 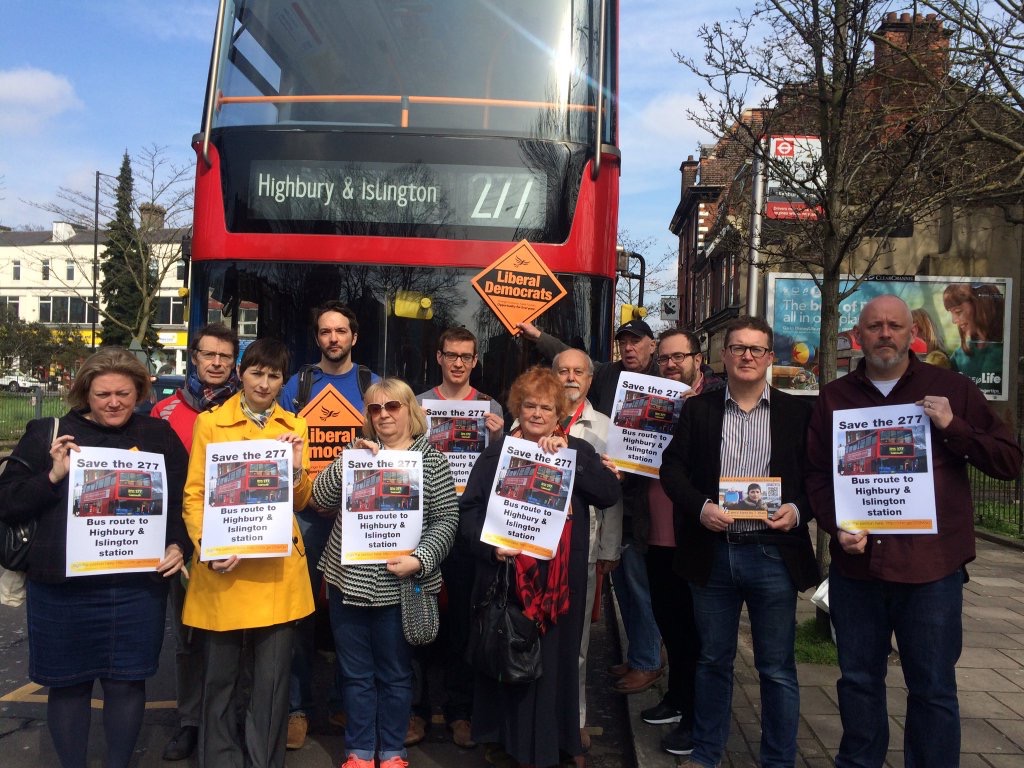 Liberal Democrat Mayoral Candidate Caroline Pidgeon joined local residents and London’s TravelWatch in criticising TFL plans to cancel the 277 bus service from Dalston to Highbury Corner. The 277 route, which currently runs through Hackney on its way between Leamouth, in Tower Hamlets to Highbury Corner, may in the future have to terminate at Dalston Junction following the proposed redesign of Highbury Corner.

Transport for London (TfL) and Islington Council are looking at the possibility of replacing the Highbury Corner roundabout with a two-way traffic system, and pedestrianising the road outside Highbury and Islington station. The redesign leaves the 277 with no space to turn at Highbury Corner, TfL has proposed to shorten its journey “to help the road layout to operate more effectively”. Bus users have hit back saying TFL have not been imaginative about other options they could consider.

Plans that have been described as a “Dogs Breakfast” by objectors, and have been slated by the high respected local amenity group, the Islington Society.

London TravelWatch, the capital’s transport watchdog, has criticised the plans to shave off seven bus stops..

“These plans are disappointing as this is a road scheme which is dictating the future of an important bus route,” said a spokesperson for the group.

“All we need from TFL is to be a bit more creative and find possible options for the service to continue to run to Highbury & Islington Station, sadly that’s not something that TFL and its bus service planners do well. Why have the night service going to the Angel, and not the day service??"

“"I, like many others, rely on the 277 daily to get to work, even with the current service it is not uncommon for buses to drive past my stop on St Paul's Road because they are too full. Cutting the 277 entirely will mean effectively halving the number of buses between Dalston and Highbury Corner. This will make getting to work a nightmare.

I only found out about the proposed cut to the route from another commuter. Where was the full residents' consultation? Or was this just a quick fix by TfL and Islington Council's poorly thought out Highbury Corner redevelopment plans? Surely we should be improving public transport links, not taking them away."

He was joined by Diana Jevons a regular user of the route who said:

“This route is already crowded at peak times and TFL want to cancel half the buses? We need more buses, not fewer.”

And Highbury resident and campaigner Ed Cooke who said:

“Why must the users of public transport like the 277 suffer because of an ill thought out proposal to change the layout of Highbury Corner? It may look nice in the photos but the reality will be very different - a unusable waste land surrounded by cars and buses in gridlock and crisis crossed by cyclists trying to avoid the traffic. How counter intuitive is it to reduce public transport provision and amenity at a time when it should be being encouraged. Back to the drawing board please TfL.”