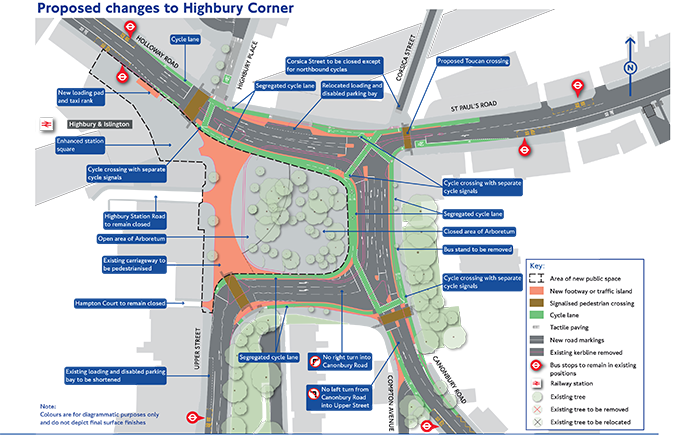 While cyclists and drivers can use alternative routes to avoid the continuous works at Highbury Corner, pedestrians and public transport users have no other option but to face the construction barriers flanking the streets.

TfL has indicated that the wrong paving has been laid on the station forecourt and it appears that works have already commenced, with those all-too-familiar metal grates being erected outside the station. It is clear that residents and commuters will have to suffer further disruption while paving is replaced for the third time. The inadequate temporary pedestrian crossing and the lack of lighting on the forecourt also raise serious safety concerns.

“Pedestrians suffer and seem to be viewed as a low priority,” said Liberal Democrat Kate Pothalingam adding, “Is this poorly executed project a taste of what is to come at Highbury Corner?”

Beyond the station forecourt, works to remodel the 1960s roundabout have now started, with major questions left unanswered. Liberal Democrat representatives were present at the St Mary’s Ward Partnership meeting on 26 June 2018 to make sure residents’ concerns were heard. We are particularly worried by the impact of queuing traffic on air pollution, especially on the health of the children at Canonbury Primary School and by threat of ‘hostile vehicles’ veering off on to the forecourt.

TfL and the Council have now been forced to consider a ‘green screen’ to protect Dixon Clark Court residents from the increase in air pollution caused by slow-moving traffic, and concede that there is a need to evaluate traffic displacement.

We remain concerned that these interventions are just an afterthought. The consultation process run by TfL and the Labour Council has not worked adequately and detailed plans and drawings for the open space created by the re-modelling are still not available to the public.

Worryingly, TfL has started construction work and felled a significant number of trees despite the lack of the promised Environmental Impact Assessment screening opinion from the Council.

Liberal Democrat 2018 council candidate Pierre Delarue said: “I would like to see Islington Council use the re-modelling as an opportunity to plant additional trees and increase green space. With moped crime on the rise and increased rough-sleeping, poor design at Highbury Corner could have a significant impact on commuters and on residents' everyday life. This project could result in a wonderful, safe, high-quality and well-designed space for everyone. This is put at risk by an erratic delivery process lacking in transparency.”